My office is located on a small general aviation airport. My window overlooks the ramp, fuel pumps and the taxiway/ runway, so I get to observe pilot behavior every day—some good, some bad.

Here’s a question: Why do some pilots start piston engines at nearly full power and sit there for minutes with the engine screaming at 2700 RPM? Checklist…what checklist?

A couple of guys at our local airport think we need an airshow every time they takeoff, using full power in ground effect to the end of the runway followed by an extreme pitch up and out to exit the pattern. One pilot with his Extra 300 has had at least two close calls with aircraft entering on the 45 to the downwind. I have counselled him about his reckless flying and its potential to cause a midair, but he won’t listen. A couple of other pilots have spoken with him as well. Two students training at our airport will not fly when this knucklehead is in the pattern. Funny thing, he is a retired Navy Vice Admiral. Last year a young CFI at our airport spent a lot of time in a C172. He was a cigarette smoker, and every time he returned the club airplane from flying he and his student would taxi up to the fuel pump which sits 100 feet from my office. The line boy would come out and climb up a ladder to refuel the 172. Meanwhile the CFI would stand under the wing and light up a cigarette. The young lad did this repeatedly despite having the obvious pointed out to him by the airport manager and yours truly.

A couple of weeks ago I was looking out the window when a Piper PA 32 Cherokee 6 taxied up. The nose strut was fully extended and the tail of the aircraft was nearly touching the ground. I sat there and watched four big guys get out of the airplane. One gent had to be over 6’5” and nearly 280 pounds. After they got out, one walked back to the rear door on the left side of the aircraft, opened the door and out stepped a 30ish woman. She started handing out bags to the one of the guys, while another unloaded more bags from the nose baggage area. After unloading the rear, a young boy climbed out. Six people—plus lots of bags. But wait. The young mother reached in and pulled out a baby in a car seat! I took the opportunity while they were tying the aircraft down to walk over and talk to the guys. Nice folks who flew out from western Nebraska for a brother’s collegiate graduation. I asked the pilot to please consider weight and balance in the future.

What were they thinking? Today while sitting at my desk I noticed another Cherokee 6 taxi up to the fuel pump (what’s up with 6s this month?). The line boy was finishing up when a St. Louis thunderstorm rolled in pelting the airplane with sheets of water. Incredulously, the pilot fired up the Lycoming and taxied to the runway where he departed immediately into the severe storm. Lightning, hail and intense downpours accompanied his departure. Visibility quickly dropped to less than 100 feet (I could not see the fuel pump) soon after he departed.

This past winter we were experiencing a bout of freezing rain/sleet when I heard a piston powered aircraft fire up. Soon after a Piper Navajo taxied out and departed. Into freezing rain! Last year we had a C170/C140 fly-in at our airport just prior to AirVenture, with many folks flying their beautiful Cessna taildraggers to Creve Couer for the event. These lovely airplanes were parked wingtip to wingtip on the nicely manicured grass runway near our shadeports. Arriving pilots at the reception tent near the parked aircraft were enjoying the weather and looking at all the lovely aircraft. Meanwhile, about 5:00 pm, a pilot new to our airport with a new-to-him Piper PA28-140 decided to take his wife for a ride in their airplane. On arrival at the airport, the pilot discovered his battery was dead. He had his wife hold the brakes with their little dog on her lap while he hand-propped the Cherokee. You guessed it; things went quickly downhill. The Cherokee, with the wife in command, left its shadeport at full power, transiting a bean field before encountering a beautifully restored C170. The Cherokee lost a wing while cutting the Cessna in half. The wife center-punched the windshield with her face—which went through the plexiglass. The C170 owner had to be physically restrained from taking a swing at the hand-propping expert. 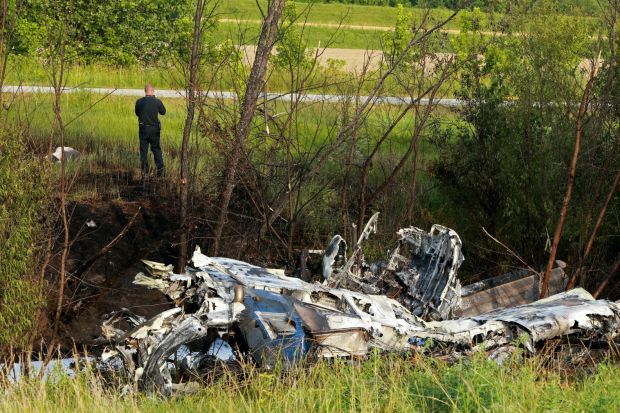 About the same time of year a pilot who had recently received his multi-engine rating departed our airport at zero dark thirty in his new Cessna 414. He had shopped insurance companies to find one requiring the minimum amount of dual instruction. Naturally, his CFI got the heave ho as soon as the pilot had logged the minimum hours required by his underwriter. On the very next flight he took off before sunup, apparently without having secured the nose baggage door. When the baggage door inevitably opened sometime during takeoff the pilot elected to secure the engine next to the door and land. This meant he had to negotiate his way around the airport in the dark in C414 with one engine caged and the gear and flaps down. The plane crashed about ten yards short of an eight lane highway with lots of early morning traffic and promptly burst into flame. The pilot managed to escape with serious burns.

What is the antidote to this behavior? Sometimes just approaching the pilot and sharing your concern for their safety is enough. The Cherokee pilot was receptive to my suggestion. The Admiral…not so much.