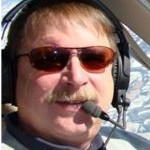 The summertime flying season is half over and Airventure is around the corner. I hope you will join us there and at Santa Fe over Labor Day weekend for our annual LOBO/Lancair Landing. 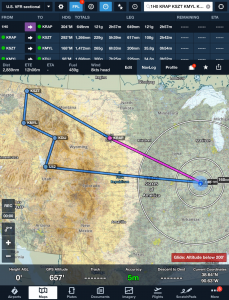 Shelby and I just completed a week long flying vacation through the intermountain west, with stops in Sandpoint and McCall in Idaho; Jackson Hole, WY and Salt Lake City. Our annual sojourn’s purpose was to explore several fly-in communities and potential retirement spots. We departed a week ago from St. Louis in the Lancair, with a stop for fuel and lunch in Rapid City, South Dakota (KRAP), then on to Sandpoint, ID (KSZT)–a 1266 nm flight.

Weather enroute was uneventful, with a few deviations for convective buildups with help from ATC and XM NEXRAD. The FBO at Rapid City always does a great job, and their new facility is very nice. On departure we got a good look at the Air Force B-1B squadron stationed at Ellsworth AFB. 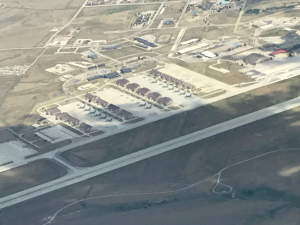 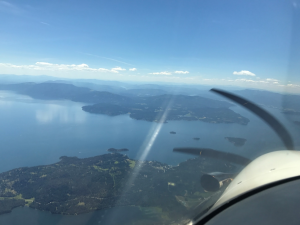 Our short turn at KRAP allowed more time for the noon sun to grow some cumulus. Fortunately the buildups remained south of our course to Sandpoint. We arrived at Sandpoint, ID (KSZT) late in the afternoon to spectacular alpine scenery along Lake Pend Oreille. We rented a car for the short drive to our hotel and enjoyed dinner at a restaurant on the water. 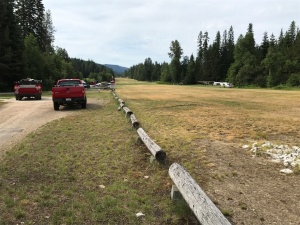 The next morning we drove an hour to Priest Lake, another alpine lake located in the Idaho panhandle close to Canada. Priest Lake has many cabins and cottages along the shore and is a great place to live “off the grid”—no bars on the cell phone. There is a small private grass strip airpark, and one general store located on the south end of the lake, otherwise it’s a 45 minute drive to a small crossroads for more shopping. 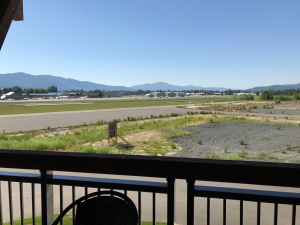 Sandpoint is a small community of 7500 residents in northern Idaho with beautiful summer days and winters that can stretch from October to April. The community, like many we visited, is largely supported by summertime tourism. While in Sandpoint we also toured a fly-in community called Silver Wings (www.silverwingatsandpoint.com) located at the Sandpoint airport. Silver Wings has been under development since before 2008, but was held up by legal issues and the economy. The legal issues were resolved in their favor, and the property is now back on the market. There are two display hangar homes onsite (view from balcony) and they are stunning. 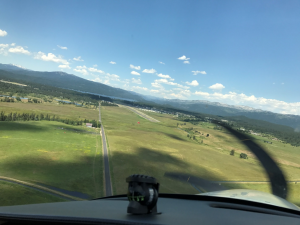 We departed Sandpoint midday on Sunday and flew about an hour south to McCall, ID (view of airport from the south) where LOBO member Dan Coury has a residence. McCall, located on Payette Lake, is a former logging town that is now a tourist destination, boasting mainly Boise summer vacation residents. The community is smaller than Sandpoint, with a population just under 3,000. The airport is at 5024 feet MSL and has a US Forest Service fire base on the west side. McCall's airstrip is in the middle of the fabled Idaho back county. There, Lori MacNichol operates McCall Mountain/Canyon Flying Seminars LLC (www.mountaincanyonflying.com ), teaching pilots how to operate safely in the thin air near big rocks.

While there is no fly-in community in McCall, the airport has plenty of hangars for rent or sale. We were fortunate to have Husky owner and real estate agent Mike Chapman show us around. We looked at retirement and vacation property, and took in some sights along the water. 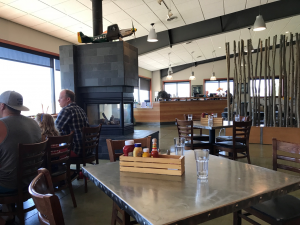 After two days in McCall we turned in our rental car and loaded up the Evo for another short flight, this time to Driggs, Idaho (KDIJ) near Jackson Hole on the west side of the Tetons. A little preflight planning revealed that the Jackson Hole airport and Signature Aviation charges exorbitant fees and fuel prices. Driggs, on the other hand, is only a 45-minute drive over the pass, offers great service, a super restaurant (pictured), a nice little warbird museum complete with a MiG-15 Fagot, MiG-17 Fresco, an FJ-4 Fury, T-28 Trojan and F4U Corsair, and best of all, reasonable prices. Worth the stop!

Our goal at Jackson Hole was to explore the Alpine, Wyoming Airpark, about an hour drive south. The community is very small (one gas station, three diners, one motel). We had a great tour with Alex who showed us many properties there on the market from $2 million to $21 million.  The airpark boasts some 80 residences—mostly second homes for their owners—one of which belongs to a Lancair Legacy owner whom we visited. While there we saw a Citation X arrive and taxi up to its hangar home. Needless to say the property was gorgeous and especially so in the summer. Given the 500+ inches of snow last year Alex mentioned, this is probably not an option for year-round residency. 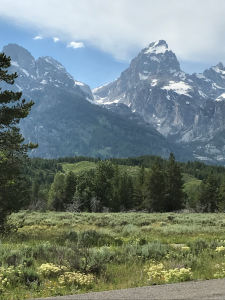 After leaving Alpine we toured Jenny Lake, Yellowstone and the Jackson Hole town square. We celebrated the Fourth of July with the crowds in Jackson Hole, then drove back to Driggs the next morning for our departure to Salt Lake.

Driggs is at 6200 feet MSL—highest on this trip—and due to the drive we weren’t able to take off until 1030 am; the ASOS reported density altitude was already 8800 feet. Anticipating a performance degrade for our normally-aspirated aircraft, I did not take on a full load of fuel for the short, but bumpy flight to Salt Lake. We descended in to the Salt Lake valley and canceled IFR at the urging of ATC. They were helpful with VFR vectors to U42—South Valley Airport, formerly Salt Lake #2. On a side note, if the FAA wants to make money it should sell naming rights on airports! 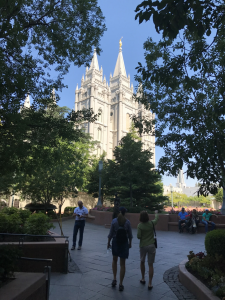 We had a great visit with in-laws for two days, including an incredible tour of Temple Square (pictured) in Salt Lake City, and a stop in the genealogy center for research on the family tree. The genealogy center is fascinating, well worth the time and is free to all.

We decided to leave SLC a day early to avoid the typical summertime afternoon weather in the intermountain west. This screenshot from my iPad shows the weather the day prior to our departure. 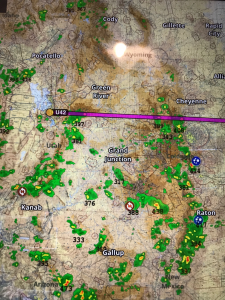 Forecast winds suggested we could make the 999 nm trip back to St. Louis non-stop, but we had a fuel stop in mind if actual conditions proved different. Having watched the weather patterns over a week, I expected widespread afternoon thunderstorms in the intermountain west, and so planned to be off early. We departed at 0730 and were east of Denver by 0930 with no problems. Additionally, since it was VMC I decided to depart VFR and remain under the SLC Class B to avoid IFR vectors cutting in to my fuel reserves. The weather was beautiful, and with the help of Foreflight, Garmin and ATC I was soon climbing east bound with no weather issues. 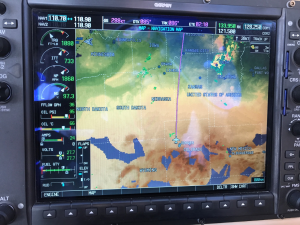 This screenshot of the Garmin display shows our weather passing Denver; it pays to fly early in the mountains!

The rest of the trip was uneventful until arriving at our destination in St. Louis. Shortly after I was handed off to STL approach another aircraft reported in 4 nm east of Spirit airport at 4500’ MSL requesting VFR flight following. I looked for him on the Garmin traffic display, and sure enough the sector he was in was Class B airspace from 2500’ to 8000’—oops! I checked in with STL TRACON and remarked the traffic that just checked in was in Bravo airspace. The controller agreed and said he was going to discuss that with the pilot. Ouch…

Preflight planning, scheduling flexibility, an awareness of terrain and weather plus an appreciation for density altitude altogether provided us suitable—which means safe—options, allowing us to enjoy a safe flying vacation amid some of this great country’s most awe-inspiring terrain. Happy Fourth of July!